Today I had back-to-back meetings/brainstorms/workshops with my German colleagues. Even though the company is supposed to be ‘English first’, it still makes me feel bad that in a room full of 12 German speakers + me, they all spoke English in the meeting to accommodate for me.

The worst part was at the end of the day, when I’d left the building but realised I’d left my gloves upstairs. I had to go back in and try to explain to the German-only receptionist that I needed to go back upstairs to find my gloves.

I trawled back as far as my mind would take me to try and recall some of my GCSE German. I got as far as “Ich hat mein mitten ge…” but, ironically, I couldn’t remember the word for ‘forgotten’, so she had no idea what I was on about.

Thankfully, someone nearby spoke both German and English, and he helped me explain the situation.

The whole thing made me feel very ignorant. Especially later when I realised that the German word for ‘gloves’ is ‘handschuh’ and not ‘mitten’.

Plus, the waitress in the restaurant we went to this evening absolutely hated us because we were ignorant Brits. I didn’t need to know any German to be able to translate the disdain on her face.

In better news, look at the size of this Calzone that she came out with. (I picked it mainly because ‘calzone’ is the same word in Italian, English and German) 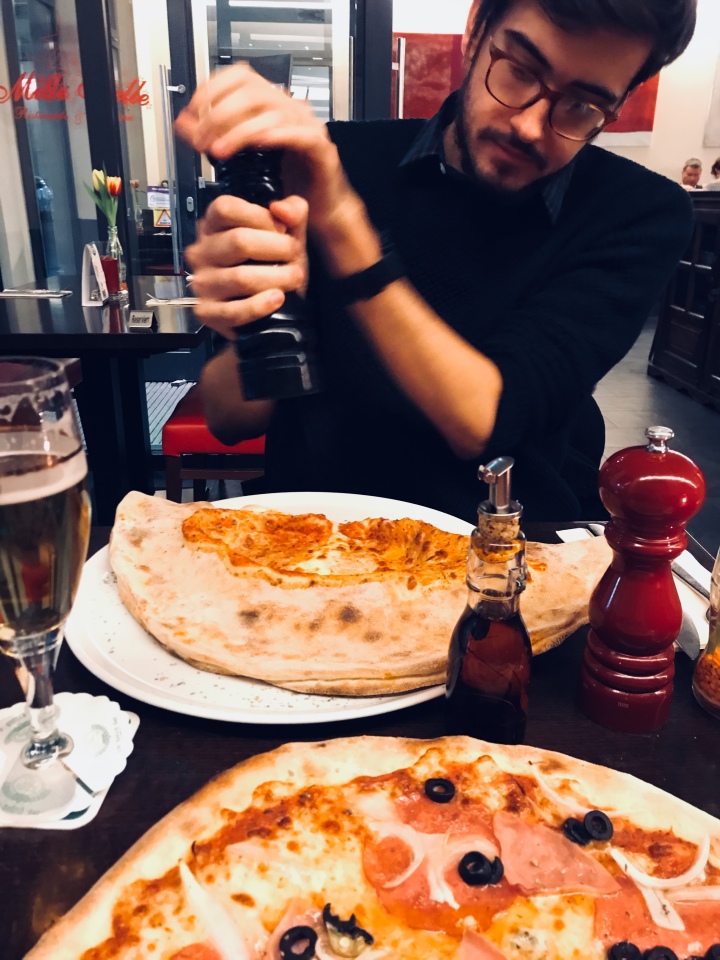 Thankfully, my lack of German didn’t hold me back in the meetings I had today. They were all really productive, and I’m glad I came.

They seemed to appreciate what I had to say, and I made sure that I said everything that I wanted to say.

Until tomorrow, I’m just annoyed I could only say it in English.