Today was the annual duck race and street fair in my Grandma and Grandad’s village. We’ve been going every year since I was a kid, and it always happens on the late-May bank holiday Monday, but somehow every year I forget about it until the last minute.

I had no other plans though, because what else would I be doing on a surprisingly bright and sunny bank holiday other than watching 1800 plastic and/or rubber ducks avoiding various obstacles as they follow the flow of the river Churn? 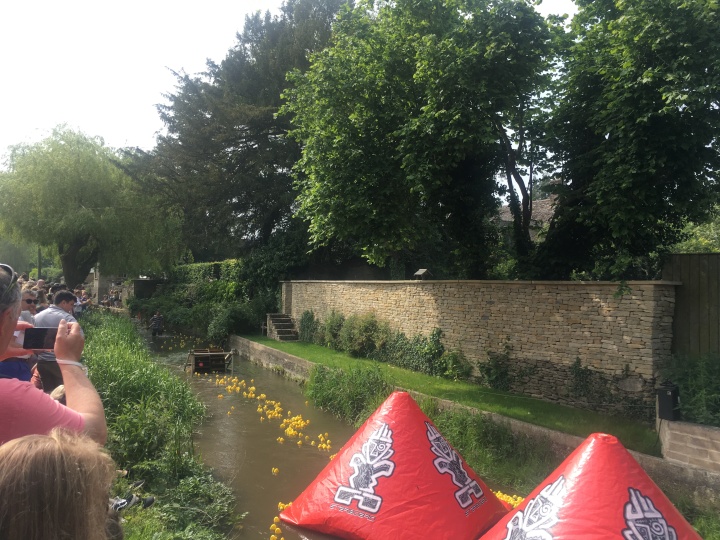 Between the eight of us we bought forty tickets at a pound each, and the top prize was only £50. So it doesn’t seem like a very prolific money making scheme.

I should probably explain how it works, just in case this kind of event is only specific to my part of the Cotswolds.

Basically, you buy a raffle-ish ticket which has a number on it. That number corresponds to a duck. At 3:30 a net full of almost two thousand ducks is released into the river. The first duck to traverse the course and make it to the finishing bucket at the end of the course is the winner.

We did not win.

To be honest, fifty quid seemed like a bit of a measly prize considering they sold £1800 worth of tickets. When I expressed that sentiment among my cousins today they mumbled some bullshit about “It’s for charity…” but I still think the prize money should be at least three figures.

Inexplicably, the duck that won was duck number five. Number five of 1800. His ticket would’ve been sold from the front of the book to the very first buyer.

Until tomorrow, you’ve got to get up pretty early to make any money from the duck race.