Today Alice and I went out for a curry to celebrate one of our many anniversaries. We’ve been together so long at this point that we’ve started to lose track of which date is supposed to commemorate which event, but I was definitely aware that June 12th is some sort of occasion.

We usually wouldn’t do anything special, but on this occasion we decided to go out for a spontaneous curry. Because why not? The curry house is literally a five minute walk from our house (although it always feels like longer on the way there when I’m hungry).

We debated just spending £40.00 on the set menu with all of the trimmings, but decided that was a bit excessive. So we ordered a la carte and ended up getting less food for the same price. 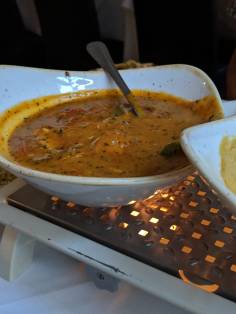 The food was good though. I ordered Poulmi Lamb, but when it came out it was Poulmi Chicken. No magic trick there, just incompetence. Alice had a chicken korma with spinach in it. That’s not what it was called, but that’s what it was.

It was nice to get out on a weeknight. Well, it was nice to get out at all. Going to restaurants to eat lots and lots of food is one of our favourite things to do together. And really, we shouldn’t have to wait for some non-descript and unknown anniversary to feel like we have permission to go out.

Then again, millennials will never enter the property ladder because we always buy avocados, or something.

Until tomorrow, happy anniversary — whatever it was for — my love.