Today I cooked Chinese five spice duck, with udon noodles stir fry. I’ve committed to cook dinner for my parents every Saturday night, so long as I’m in the house, and Asian food is about all I enjoy cooking. I like it because it’s relatively simple, reasonably healthy, and full of flavour.

Tonight’s recipe was given to me by a good friend and mentor, whom I admire very much. And I’ve only said that because he only reads these posts when they’re about food. He cooked it last weekend, I bugged him for the recipe all week, and I tried to replicate it this weekend.

Again, the recipe is relatively simplistic, but there are a few little tricks he taught me to really make the dish. The recipe calls for leftover roast duck, but I did it bespoke for this dish by scoring the skin and marinating four duck breasts in soy sauce, honey, garlic, ginger, and Chinese five spice. Then I went out for four hours. 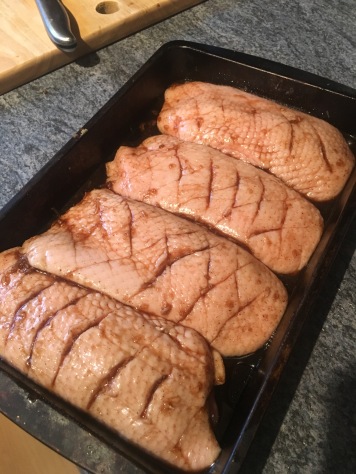 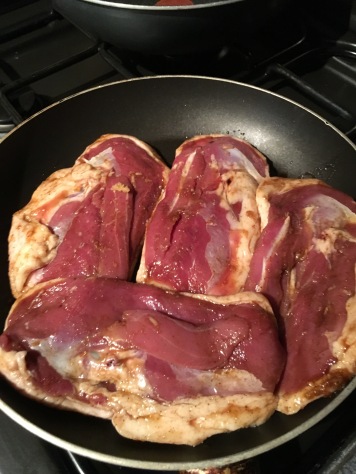 After preparing all the vegetables (celery, spring onions and red chillies), I pan fried the duck skin-side down in a cold, oil-less pan, for five minutes, then flipped them over and fried the other side for three minutes, just to give the outside a nice golden colour. 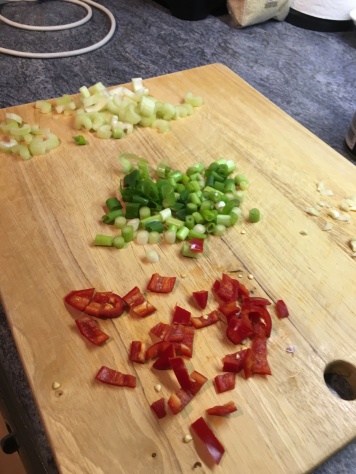 When the skin was cooked, I chucked the duck in the oven for 10 minutes to cook through, but mainly just to give me some time to concentrate on the starter. I’m completely obsessed with gyoza dumplings, so I dumped a packet of those into boiling water for 8 minutes, then finished them off by frying them in chilli oil for another couple of minutes.

We ate the (delicious) starter as I let the duck sit for a bit.

Then, I started to fry vegetables in oil, chilli, ginger, and garlic, added the udon noodles and beansprouts, and stirred in four types of sauce: soy, hoisin, oyster, and more sriracha. Plus a splash of rice wine vinegar. I’m not one for sticking to exact quantities or measurements when I cook, so if you’re here to follow some specific recipe, then my suggestion is to just wing it and chuck in whatever you think is the right amount. That’s much more fun.

When I was satisfied that the noodles were suitably sauced, I made my Mum carve the duck. The rest of it was all me, but letting her carve the duck ensured A) it was cooked, B) it looked pretty, and C) she felt like she’d contributed. 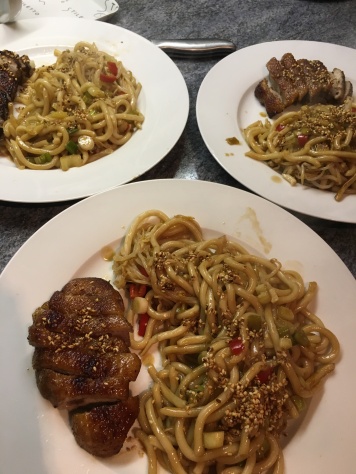 The final touch was a sprinkle of toasted sesame seeds (which again, if you’re following this as a recipe, I definitely should have reminded you to do earlier on).

I have absolutely no problem tooting my own horn, so I will say this: I was actually very impressed with how it turned out. I liked that the noodles were saucy. Marinating the duck for so long ensured it was full of juicy flavour. The toasted sesame seeds were a nice touch, because it added another layer of texture.

If I’m being critical, I’d say that for next time I’d consider only pan-frying the duck, to keep the skin crispy and the meat pink. I’d add an extra veg element, like mangetout or sugar snap peas. I’d also probably add the spring onions in raw at the very end, just to add in another layer of crunch. And I’d personally prefer it to have been a bit hotter, so would maybe consider adding another chilli, though Mum doesn’t really like food that is too spicy.

Overall, it was a success. Mum was impressed. Dad was loving it. I was both.

Until tomorrow, and, perhaps more importantly, I really enjoyed making it.